Follow Bold As Love Mom on WordPress.com
Join 1,043 other followers

Put me in Coach…. 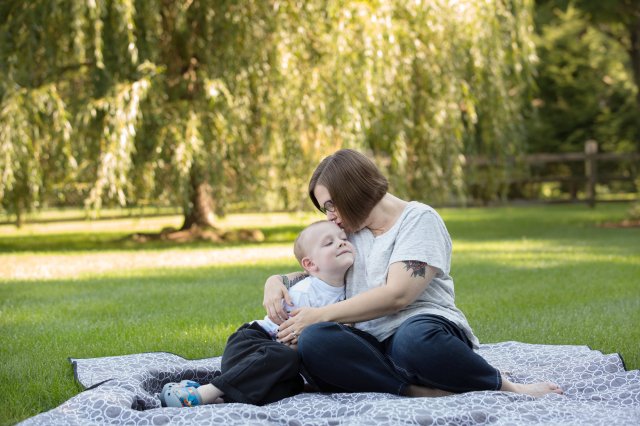 Today was a wonderful day.  Adler got to meet some local DJ’s at his favorite radio station.  They invited him to come and hang out at the studio after I reached out to one of them and shared his story with him and his adoration of them and their morning show.  So we went as a family.  Just us 3 and had a blast.  Adler told a silly joke on the air and laughed and danced and was himself.  That contagious, electric personality felt through the airwaves to those tuned in this cold arctic January morning.

He had a port flush then in the afternoon at the hospital.  It’s his last one.  His port comes out the end of this month when he goes to Chicago for his every 3 month MRI.  Wow.  His tumors are stable enough that they feel it’s ok to take “maximus porticus” out.  Yes, he named it.  And why wouldn’t he?  That’s so his style.  He had labs drawn by the wonderful Jenny, his nurse, who loves that boy like family.  And they really are and have become extended family there.  Hell, we have spent a lot of time there.  Nearly 2 years.  His labs were fine.  All looked good according to his doc and she seemed very pleased and positive with his progress.  And we are too.  We basically won’t and don’t have to go back anytime soon baring any fevers that may come up before the surgery.  And then…..we wait.  We won’t even need to be seen.  Wow.  I was kind of happy about all of that.  I mean, I am happy.  I am.  Right??  But my safety net, my once a week eyes on him that turned to once a month is ending.  And that is good.  So good, but I am terrified too.

My son has cancer.  He has brain cancer.  NOT HAD, HAS.  It’s still there.  And I am absolutely terrified that we, he will have to go through this all over again someday.  It’s brutal and it doesn’t care.  It’s cancer.  It’s a killer living inside him and it’s merely doing it’s job.  It may stay stable for years.  We hope for good.  But it’s an echo in my mind at all times.  I keep a strong face and posture even through the broken and shattered pieces I have picked up and put back together.  They fit different now though.  I have to learn how to be me again.  I ran right into the role of caregiver when his pain started and my mom duties were in the red on a daily and nightly basis.  Then the misdiagnosis and the relentless search for help calling over 30 hospitals and then him almost dying and Lurie saving him.  Then correct diagnosis and then the treatment and now we are here.

And in that time we were spectators to a sport our son didn’t ask to play.  He didn’t want to play but he had no choice.  And he played hard and strong and some games he won and some he didn’t.  But we ended our season on a high note.  His pain is GONE and his tumors are stable.  I am still a spectator in the stands though……or have I become the coach??  I don’t know.  I really don’t know.

I washed him tonight in the shower as he still cannot bend over to wash himself properly and as I soaped him up and washed over that port, I wanted to cry.  It has been accessed over 50 times.  For chemo and for fevers that required antibiotics and steroid doses.  My baby.  The boy we made.  That grew inside me that I read Jim Morrison poetry to in the womb and played music for too.  He is so beautiful.  He really is a beacon of light.  His smile, his laugh and all that he does is so full of life.  A life he had to fight for because he was thrown into the game way way ahead of time.  Pain that was agonizing and debilitating ruled his world and then disease and life saving treatment that was necessary and vital but took him to world he at age 4 then 5 and now 6 should never ever have known.  And he does know it.  He knows it play by play.  And he’s a champion.  He is a fucking champion.  He’s the one raised on the shoulders of his team mates arms spread wide and up to the sky in victory.  Victory of life.  HIS LIFE.  Flags wave and anthems play in my mind but all while I worry.  While I hold the tears in until the damn breaks and they pour out of my eyes and I shutter with fear of the unknown.  I try to focus on the now.  Be present.  Be in the moment and I am.  I was.  I saw him laugh and dance and I looked at him with those headphones on today listening to the music and enjoying himself.  He shut the world out for those moments and he just was…..he sat in that chair and you could see the joy on his face.  And he brings that joy to others where ever he goes.  My son is pure and true and all things that are right in this world except he has cancer.  He has hydrocephalus and adrenal insufficiency.  But he is one badass kid and he’s played the game well.  May he be held high in honors and his name said with wonder and inspiration and may his beautiful legacy continue to grow and get bigger as he does in body and mind.  He is a champion leaving the field, the court, the track, the pool or whatever sport I imagine…..and next time if he HAS to play…..I will be right there again screaming and yelling and cheering louder than anyone and may we never ever lose!!!!